Tony Abbott has tweaked his doorstop schtick a little:  he's added a new sound bite. As well as repeating the  standard promises to repeal the carbon tax, repeal the mining tax, stop the boats, get the budget back in the black and cut red tape, he’s going to revitalise Work-for-the-Dole.

That promise to resurrect Work-for-the-Dole is straight out of the Liberals' policy platform Our Plan – RealSolutions for all Australians: The direction, values and policy priorities ofthe next Coalition Government. It's fleshed out on page 20 of the plan. The Liberals promise that they “will deliver higher productivity growth by boosting workforce participation” and “encourage every Australian to be a productive contributor in the nation's life”.
Read more »
Posted by Gummo Trotsky at 12:38 PM
Labels: Centrelink, Politics, Welfare Policy

On the whole, 2008 has been a pretty good year for me. I enrolled in a post-graduate course at Melbourne Uni - if I keep it up I'll be a licensed Master of Publishing and Communications. Hell, I might even go do the mortarboard and gown thing for the first time when I finish this one. By dint of not so persistent practice and application my drawing steadily improved to the point where I felt up to hanging a few of the better ones on the study wall. Things were looking good, as long as I ignored the 'housing affordability crisis' - in plain English, Australia's chronic housing shortage.

Then in late October, when I was out in the outer leafies, dog-sitting again, the usual happened: that cantankerous old bastard in the sky, the one in whom I refuse to believe, dropped a big, fat jobbie into my life. I came home for an overnight stay, after a class, and Zeppo Bakunin showed me the notice to quit that we'd received from the agents. Our landlord and landlady were splitting up and the landlord and his daughter needed a place to live. Moving us out, so that they could move in, was cheaper than moving into a rented house, in a tight rental market, and keeping up the mortgage payments on this place, regardless of the rental income and negative gearing. I used to like our landlords but, sooner or later, this country's housing market forces everyone involved in it to act like a bastard.

So now Zeppo Bakunin and I are looking for the opportunity to perform our own little act of bastardry - we're looking for a house we can move to. Whatever we look at, there's bound to be at least one young family looking at the same place. People who'll use the extra bedrooms for sleeping in, rather than accomodating desks, computers, books and assorted stuff.

Since the market is very tight at the moment, it's wise to have back-up plans. My plan B is to get really active on internet dating sites, and try to find someone with really low expectations with a bungalow in the backyard. Plan C is to pack up all or most of the stuff, put it into self-storage and use my pensioner Christmas bonus to do a bit of travelling: the way the economy is heading, I reckon the first edition of The Rough Sleeper's Guide to Australia will find a ready market.

At times like these, I envy the Swedes. Back in 2002, I read a World Bank report which gave the Swedish government a slap on the wrist for allowing a surplus of public housing to develop. This was, of course, a waste of economic resources and therefore economically irrational, if not irresponsible. Given the choice between economically responsible government and a roof over my head, I know which one I'd take right now.

Enter at Your Own Risk 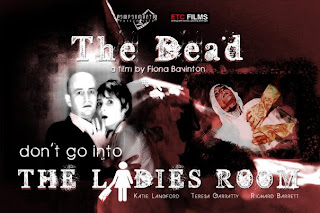 A couple of my real-life friends decided to go ex-pat last year; they're now in London, doing what ex-pats do. In this case, getting sucked into a Movieum of London short film contest, where entrants had 48 hours to produce a slasher horror film for screening on Halloween. You can read a bit about the making of here, or you can just take a look at the finished entry. An extended version with more slashing is in the works.

Posted by Gummo Trotsky at 7:32 AM 1 comment:
Labels: Kulcha, Life

I noticed a couple of new posters advertising The National Rupert at a couple of tram stops the other day. I didn't have a camera handy, so when I got home I drew a copy from memory, for anybody out there who hasn't seen them yet. 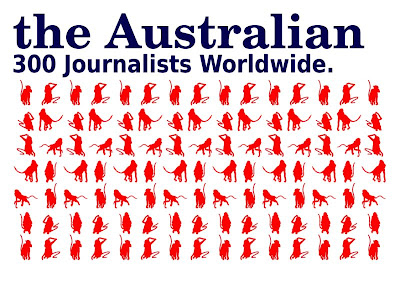 Almost, But Not Quite, A Retraction

On September 10, reluctant culture warrior Kevin Donnelly declared, in the National Rupert, that his worst fears for the future of education had been realised:

LEADING up to the federal election, I welcomed the ALP's policy calling for a national curriculum based, as it was, on a conservative agenda very much like the Howard government's approach to reshaping the teaching of history and English.

The fear was that the devil would be in the detail and, given the cultural-Left's control over the curriculum, that the agenda would be captured by those opposed to the more academic and balanced approach.

The second appointment proving that the national curriculum has been captured by the usual suspects is that of Professor Peter Freebody, from the University of Sydney, who will oversee English as a subject.

Today, Kev's pleased to announce that:

There's no prize for guessing who wrote the initial advice paper, and the new curriculum that has Donnelly so chuffed. If you can't guess, this report from The National Rupert has the answer.
Posted by Gummo Trotsky at 5:32 PM No comments:
Labels: education wars, Kulcha Wars, Newstralia, The New Civility

'Age of Bastardry Over' - Bastard

HERE is the latest, shocking fashion news: nasty is out and nice is in.

Bastardry is suddenly so last season - just like Big Brother - that all the best stars must now switch their sneers to smiles.

The sooner this trend spreads from TV and radio to those newspapers, the better.
Posted by Gummo Trotsky at 12:44 PM 1 comment:
Labels: Media, MSM Snark, Newstralia, Own Goals

Word of the Day: Thingo

With nothing significant to report from Canberra, the front page of today's Hun is devoted to the dastardly 'West Gate Bomb Plot' of recently convicted terrorist wannabe Abdul Benbrika. According to The Hun's Keith Moor:

One of the most chilling conversations taped by police was between Benbrika terror network member Fadi Sayadi and an associate as they discussed destroying the West Gate Bridge...

Sayadi suggested it would be possible to snorkel or scuba dive under the bridge and plant "thingos underneath".

Obviously Sayadi wasn't talking about water-lilies; nonetheless he sounds completely clueless. Anyone wanting to plant thingos under the Westgate Bridge need only take a walk through Westgate Park in South Melbourne. Once you had your thingos in place at the base of the Eastern pier you could hop on the ferry to Science Works, where a short walk will take you to the Western pier with its memorial to the workers who died when the bridge collapsed during construction.

If Sayadi had ever made that little trip he might have seen how difficult it would be to bring down the West Gate Bridge with thingos, however well placed. Still, it's a good excuse for THe Hun to milk the story for another day while they wait for the man who would be Prime Minister eventually to make his move on Malcolm Turnbull. Since that's going to take at least six years we can all look forward to a lot more well beaten-up crap on The Hun's front page.
Posted by Gummo Trotsky at 1:44 PM
Labels: Bathos, Journalese, MSM Snark, Newstralia
Older Posts Home
Subscribe to: Posts (Atom)