I got sucked into reading this piece in yesterday's Age by the first paragraph:

EVEN though it was just a skeleton, there was still something that said Australian larrikin about the soldier's remains that lay as he fell on a shell-blasted Belgian battlefield 91 years ago.

I just had to know what it was about this skeleton that alerted its finders to its nationality. Was it the cheeky, devil may care grin on its face? A certain louche set of his broad manly shoulders, relaxed but not slouched? The straight spine of a man not burdened by class distinction? Loose hips and rangy legs used to taking long, loping strides over a wide brown, sunburnt country? The answer came in the second paragraph:

In the green summer fields the archaeological team that uncovered him last week, was able to identify his nationality by the rising sun badges in the earth beside him.

Ian Plimer took to the hustings in Sydney on Tuesday, to defend religion against the charge that we'd be better off without it. As third speaker for the negative team, Plimer used the occasion to denounce the 'new religion' of environmentalism. Plimer's speech has been reproduced at Andrew Bolt's blog and at Jennifer Marohasy's blog of socratic irony.

I suspect Plimer's team-mates were a lot less impressed with Plimer's performance than Bolt and Marohasy.
Posted by Gummo Trotsky at 9:53 AM No comments:
Labels: Environment, Politics, Resistentialism, Schadenfreude

This time from Andy Bolt, giving a bit of stick to another irresponsible journalist creating another 'wild warming scare':

CLIMATE change could threaten the safety of blood used for life-saving transfusions, Australian experts have warned.

A report by West Australian researchers has raised concern that rising temperatures will increase the prevalence of viruses, like dengue and Ross River, already circulating in the northern regions of the country.

Really, whichever News organisation ran that story should be looking long and hard at its recruitment policies; their journalists and editors are just woeful.

Update: you can read the abstract of the research report here. On dengue fever, it says:

[D]engue is currently of most concern to blood safety because; it can cause fatalities, there are regular seasonal outbreaks in Northern Australia and, in contrast to other viruses mentioned above an overseas case of transfusion transmission has already been documented. Notably, despite the lack of a suitable dengue screening test the ARCBS [Australian Red Cross Blood Service] already implements supplementary measures to protect the blood supply during outbreaks. (my emphasis)

Oddly enough, the fact that the ARCBS already has measures in place to protect the blood supply from dengue wasn't newsworthy enough to include in the News report.
Posted by Gummo Trotsky at 1:18 PM No comments:
Labels: Climate Change, Sardonic Detachment Therapy, Schadenfreude

It seems that since two global warming 'sceptics' appeared on Sunday's Sixty Minutes, mainstream opinion on global warming has shifted back to the 'it ain't happening and even if it is, it's not man made' position. Maybe - no-one's done the polling yet.

PROF. RICHARD LINDZEN: We need CO-2. It's not a poison, it's not a pollutant. It's essential for life on earth. I mean how much are we going to depend on people's ignorance in order to produce panic?

Lindzen's position, stated as a logical syllogism is:

Is this reasoning correct? Let's try applying it to some other chemical compounds and elements that are necessary to life and see:

So, even though an excess of phosporus in freshwater occasionally causes algal blooms, it's wrong to call phosphorus a pollutant. And distinctly unAustralian if the source of the phosphorus is agricultural run-off.

And that about wraps it up for salinisation of soils - it just can't be a problem.

There's something obviously wrong with Lindzen's reasoning: his major premise - that necessities of life can't be pollutants. What has me puzzled is how an environmental scientist could overlook his error and lavish praise on Sixty Minutes for including him in their report.
Posted by Gummo Trotsky at 8:15 AM 2 comments:
Labels: Climate Change, Sardonic Detachment Therapy, Socratic Irony

It's time for an Australian Enlightenment, where once again reason and facts prevail over mysticism and ignorance...

An Australian Enlightenment would restore ideas to the place they have occupied over the last 5cm of the football field...

Craig Emerson, Minister for Small Business, in The National Rupert Daily.
Posted by Gummo Trotsky at 7:28 AM No comments:
Labels: Politics, Society

"Dunno muj thrmodynamix but I no wut I like!" 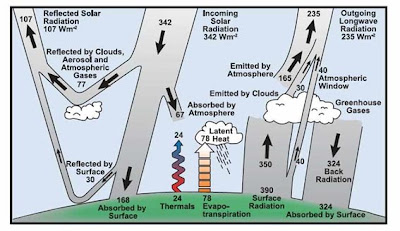 Global average energy budget of the Earth
As a follow up to Alan Siddons's refutation of the quaint nineteenth century notion of 'radiative equilibrium' - a theory now as thoroughly passe as Pythagoras's quaint idea that the Earth is spherical* - Jennifer Marohasy has posted this 'proof' from Bill Kininmonth that greenhouse gasses actually cool the earth.

Kininmonth's argument starts with the diagram above and this howler:

At the surface there is a net accumulation of radiation energy because the incoming solar radiation (168 units) exceeds the net loss of longwave radiation (66 units).

The units that Kininmonth is talking about here are Watts per square meter. As commenters on Siddons's post Chez Marohasy pointed out, the Watt is a measure of power, not energy. A 100 Watt lightbulb converts one hundred joules of energy to light and waste heat every second. What's measured in Watts per square meter is either heat flux density or irradiance - that is, the number of joules that pass through a square meter of an object's surface in one second.

So, in the diagram, we have 168 joules per second reaching each square metre of the Earth's surface in an average year. To find out how much energy that is, we'd need two more pieces of information: the total surface area of the Earth, and the number of seconds in a year. That would produce a very large and intimidating figure, but the calculation is otherwise irrelevant. Let's look instead on what would happen if there really was a net accumulation of 'radiation energy' at the Earth's surface.

The joule, the unit we use to measure energy, is named after James Prescott Joule who came up with another of those quaint nineteenth century ideas that still plague modern science - the idea that heat and mechanical work are equivalent. He also had the gall to claim that he had proved it experimentally. It's in part thanks to Joule that modern physicists treat energy as just energy rather than radiation energy, heat energy, electrical energy etc. Energy is energy, however you get it.

Ignoring leap seconds, each day has:

So our cubic meter of water will accumulate:

In less than 50 days it will reach boiling temperature. Imagine that happening over every square metre of the Earth's ocean surfaces. Thanks to heat transfer from the surface waters it would take longer for the water to reach boiling point but they'd still get very hot.

Where Kininmonth has gone so hilariously wrong is that he has overlooked two heat flows out of the Earth's surface that account for the 102 'units' of 'radiation energy' that he thinks are accumulating there. They are the heat losses due to thermals - 24 W/m, and evaporation and transpiration (evapotranspiration) - 78 W/m. That's a total of 24 + 78 = 102, leaving no energy accumulation at the earth's surface and nothing that has to be explained away by asserting that greenhouse gases actually cool the atmosphere.

* Since this 'scientific' theory is so thoroughly past its use by date, nominations are now open for a replacement theory of the shape of the Earth. This is my first preference: 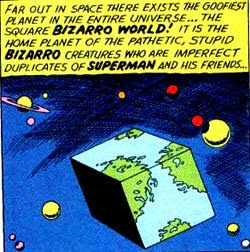 Update: Dr Marohasy is now hinting that her most recent blog posts have been exercises in Socratic Irony. I wonder who she thinks has been fooling whom.
Posted by Gummo Trotsky at 10:11 AM No comments:
Labels: Climate Change, Wingnuts

But Would You Buy a Used Car From This Man?

Brendan James Brophy, 28, pleaded guilty to 13 offences including importing and trafficking a variety of banned substances from his Ashmore home base from July, 2006, to March, 2007. He was sentenced to two years and six months' jail...

His defence lawyers tendered documents showing Brophy, a high achiever at school, was a promising model and keen gym goer before his arrest.

The court was told that after being caught Brophy became a successful real estate agent at Broadbeach.

Justice John Byrne ordered Brophy to serve six months of the sentence before being released.